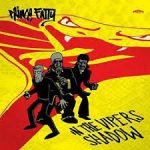 The fast-paced retro dub sound of Brighton producer and sound engineer Mike Pelanconi (aka Prince Fatty) has brightened up these pages before (see reggaemusic.org.uk 26th August 2012 and 18th June 2013). So too have the formidable amplifiers and speakers of Glasgow’s very own Mungo’s Hi-Fi, taking their name from the founder of their city and offering a full-on dub and dancehall reinvention of the classic live sound system (see reggaemusic.org.uk 2nd November 2011 and 5th May 2013). This new release from Mr Bongo Records puts Fatty and Mungo together in a serious sound system competition, each act reinventing five tracks from the other to generate a heavyweight dub-on-dub production.

The first five tracks offer Prince Fatty mixes of Mungo’s Hi-Fi, kicking off with ‘Herbalist’ (featuring Top Cat), followed by a languid ‘Scrub a Dub Style’ with no less than Sugar Minott on board, along with nice dub touches to the production.  ‘Divorce A L’Italienne’ (featuring Marina P) comes over strongly with some neat chord changes and instrumental breaks atop the essentially ska rhythm.  Up next are five Mungo mixes of Prince Fatty tracks, starting with their take on Hollie Cook’s ‘Sugar Water’ which generates a different deep-down electronic feel when compared to the version on her debut album (2011) and on the Fatty-produced ‘Hollie Cook in Dub’ (2012). Mungo also take on Hollie Cook’s ‘For Me You Are’, this time offering a relatively sparse digital reinvention of one of her stronger tracks. Mungo’s mix of ‘Dry Your Tears’ (featuring Winston Francis) offers up a slow and soulful version of the much covered song (try to hear for instance the recording from Bold One and Clint Eastwood from 1978) and in this rendering it could almost be Mungo’s Hi-Fi meet lovers’ rock.  In contrast, ‘Horsemove’ (courtesy of Horseman) moves us firmly if implausibly into Wild Western territory. The mix of ‘Say What You’re Saying’ – featuring George Dekker – is darker and deeper than the earlier version on ‘Prince Fatty Versus the Drunken Gambler’ (2012).

The Mungo Hi-Fi mixes add typically deep and sometimes doomy electronic sounds in contrast to Prince Fatty’s characteristically brisk and joyful dubs, but it’s not quite that simple: the choice of tracks alongside the differing mixes makes this a happy release indeed.

Here comes another single release from ‘Prince Fatty Versus the Drunken Gambler’, that recent and well-received album of dubbed-up frantic reggae fantasy (see reggaemusic.org.uk 26th August). This time it’s a version of John Holt’s classic ‘Ali Baba’, with Winston Francis taking the lead and Dennis Alcapone providing his characteristic background contributions. This is paired on the single with another track from the album in the form of ‘Kung Fu Battle ina Brixton’, with the remarkable Horseman taking charge.

As if that were not enough to be going on with, Mr Bongo records commissioned Sinna One  – a Brighton-based artist with a distinctive cartoon style of illustration influenced by street graffiti, comic books and sci-fi – to paint a large Prince Fatty mural on the side of a pub. Obviously. You can see it below.

Hot on the heels of the single release of ‘Got Your Money’/’Wet Dream’ (see reggaemusic.org.uk 5th August) here is the full realisation of Prince Fatty’s latest fantasy which is apparently inspired by sources including ‘Kung Fu, vintage public service announcements and dub’.  As well as both tracks from the single, there are another eight assertive tunes to be found here, featuring, amongst others, Horseman, Hollie Cook, Dennis Alcapone and legendary Pioneers member, George Dekker. The album opens with ‘King Fu Battle ina Brixton’, an alarming prospect indeed for any London commuter, with the distinctive vocal contribution of Horseman leading the way and a curious guitar solo straight out of some unspecified previous decade. Next up is the classic ‘Ali Baba’. Some fainthearts might understandably be nervous of tackling this afresh, but this is a fine version. Beginning and ending with an announcement in received BBC pronunciation from another time, possibly another planet, ‘Ali Baba’ finds Winston Francis and the ever reliable Dennis Alcapone making themselves known atop a sharp dubbed-up rhythm track. ‘For Me You Are’, with Hollie Cook and Horseman, will be familiar to those who have already heard Hollie Cook’s excellent debut album and its Prince Fatty dub version (see reggaemusic.org.uk 29th April). It remains a particularly strong track with its definitive Fatty dub rhythm unrelenting throughout –  Hollie Cook and Horseman’s treatment of the sparkly disco-era ‘And the Beat Goes On’ is also revisited here. ‘Go Find a Fool’, featuring Winston Francis, is treated with the respect it deserves and what a pleasing sound, its dub fading to an old-school conclusion of forlorn love. By contrast, ‘Barbarina’ offers fast-paced dub in a vintage style with Dennis Alcapone again prominent in the mix. ‘Prince Fatty Versus the Drunken Gambler’ is a vital and at times amusing album that generally refuses to behave itself. In fact, it could almost be described as a mix of Kung Fu, vintage public service announcements and dub…

Prince Fatty’s distinctive fast-paced dub-production approach to some surprising tracks from a previous era was heard to great effect on his dub mix of Hollie Cook’s debut album (see review on reggaemusic.org.uk  29th April 2012). Here he crops up again with his unique reggae perspective on ‘Got Your Money’, previously the slightly plodding province of the late Ol’ Dirty Bastard (ODB), the former Wu-Tang Clan rapper himself. In its original incarnation this was instantly recognisable mainstream hip-hop, musically and lyrically. Here, Hollie Cook provides the female vocal input, along with Horseman in the ODB role. Implausibly enough, Prince Fatty (Mike Pelanconi) has turned it into something closer to an uptempo dancehall anthem with Hollie Cook’s vocal contribution sounding surprisingly sweet in the chorus. This will be the lead track on Fatty’s forthcoming album ‘Prince Fatty Versus the Drunken Gambler’, due for September launch. As if that were not enough, the single is backed with Prince Fatty’s visitation upon that old Max Romeo song ‘Wet Dream’. Released originally in 1968 and banned by BBC radio, at that time the only music station legally transmitting, it has since been endured at many a wedding function, suggesting that Max Romeo’s alleged explanation that it was really about a leaking roof above his bed was less than accurate. This mix has some delightful vintage percussive keyboard, excellent dub production, along with the distinctive whooping contribution of Dennis Alcapone at key moments and there appears to be a cat in the mix somewhere. The multi-tracked vocals fit the song just right. Both tracks feature the Studio One veteran George Dekker and the production values are as good as it ever gets. On both tracks there’s something light and amusing about all this; it’s music that doesn’t take itself too seriously and is all the better for that.

The release of Hollie Cook’s debut album was one of the more surprising and pleasing reggae releases of last summer, an all-too-brief excursion into tuneful roots-style treatments of some new tracks, together with other songs gathered together from across the years. This new release – ‘Hollie Cook in Dub’ – now revisits those vocal tracks in a straighahead dub style, adding three additional dubs for good measure. This restyling, courtesy of Prince Fatty, generates a sound that faithfully reproduces the pre-digital pre-computer cut-and-paste echo and reverb methods of the King Tubby/Niney dub era, and excellent indeed are the results. ‘For Me You Are Dub’ is a standout, a rapid fire version of an Andrews Sisters’ song of the 1940s (which, backed with its vocal version, is released as a 7” single on 30th April). Even more unlikely, ‘And the Beat Goes On’ is a slowed-down dub reverb-laden reconstruction of the Whispers’ disco track from the white-trousered and smart-jacketed 1970s, while a dub take on the Shangri-Las’ ‘(Remember) Walkin’ In The Sand’ is possibly more than could reasonably be expected. ‘Milk and Honey Dub’ and ‘Crying Dub’ are also strong contenders. While most reviews of Hollie Cook’s music seem compelled to mention that her father is Paul Cook of Sex Pistols renown, it isn’t really necessary to know much about family lineage to appreciate this unexpected and excellent release which can readily speak for itself.

So far as live performance is concerned, Hollie Cook’s band established their reputation by playing Big Chill, V, Festibelly, One Love, Jazz Cafe in 2011. This year, there are plans for a release of a further album of new material and a 20-date tour, with notable performances confirmed at Bestival, Camp Bestival, The Vintage Festival. Summer 2012 sees Hollie Cook play to her biggest crowd in Manchester, supporting The Stone Roses in their historic comeback. Great expectations indeed.