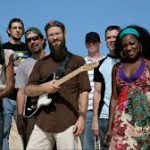 American band Groundation has been around for some time now, with a loyal following based on their jazz-tinged brand of roots reggae. Now they come our way once more with a new album (their first new studio album in four years) entitled ‘The Next Generation’, and a new single ‘My Shield’.

Featuring musicians from both Jamaica and their home state, California, the eleven tracks of the new album expand the range of the band into dub, reggae and jazz and together provide an original take on contemporary roots music. The opening brass sounds of the introductory track ‘Vanity’ are almost reminiscent of 1970s US bands like Blood Sweat and Tears before the song is resolved into a tight reggae workout. The slow reggae of ‘New Life’ is musically powerful while the wah-wah rhythm guitar of single ‘My Shield’ suggests that the disco era didn’t entirely bypass the band. A fascinating album in many ways and certainly worth hearing. Groundation have a formidable live reputation and with upcoming dates in Europe, including three UK dates in August, there is the imminent prospect of hearing them live.