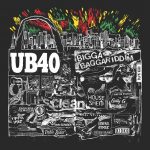 It’s sometimes hard to grasp just how long UB40 have been around. Formed in 1978, their initial album ‘Signing Off’ (1980) was a strong introduction to their sound and the single ‘King/Food for Thought’ remains an excellent debut release, deservedly sending them into the mainstream charts and into popular acclaim. (By the way, the refrain of ‘Food for Thought’ is ‘Ivory Madonna’ not ‘I’m a Prima Donna’ although the frequent mishearing of that line might be a more accurate summary of the band’s subsequent evolution). Some very strong releases followed, including ‘The Earth Dies Screaming’ (also 1980): well worth hearing even today in its 12” incarnation and, like the best of the band’s output, sharp and political.

Thereafter, UB40 moved closer to the pop/reggae mainstream which displeased some and is welcomed by others and were subject to some unreasonable criticism simply for being popular or, in a racially-tinged comment, for producing a ‘pastel’ brand of reggae. Latterly, the band split into two separate UB40s, with lead singer Ali Campbell (along with Mickey Virtue and Astro) going his own way after the kind of brotherly divergence we’ve seen with, for instance, Oasis. Some releases met with a decidedly mixed reaction including their foray into country reggae on ‘Getting Over the Storm’ (2013) (see reggaemusic.org.uk 12th September 2013).

This new release from the original UB40 (minus Ali etc) builds on the first ‘Baggariddim’ (1985) and this time features some strong collaborations with the likes of Tippa Irie and Inner Circle amongst others. The band are touring the UK in late 2021, and presumably this gives us the chance to hear some of this live. It’s fine confident reggae music: maybe ‘listen without prejudice’ is the best approach here for those interested in the music rather than interpersonal squabbles.