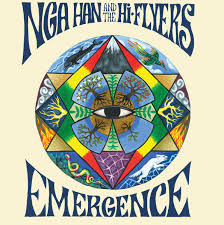 From Jamaican-born singer Nga Han, supported by Belgian producer Kingston Echo, come this new album release ‘Emergence’. Recorded and produced in Antwerp, the album is released alongside its dub counterpart ‘Submergence’. The vocal album is a strong mix of reggae sounds, consisting of eight tracks, ranging from the title track which has an 80s feel with its guitar rhythm and brass backing through ‘Versatile’ with a semi-spoken vocal reminiscent of Linton Kwesi Johnson – not a bad comparison! The album closes with Way Out, a powerful roots song, previously released as a single. The album is accompanied by a dub version of the tracks, and these are excellent arrangements made in an obvious knowledge of the 70s dub masters but by no means dominated by the all-heavy bass of that period. An impressive release, authentic and powerful reggae music