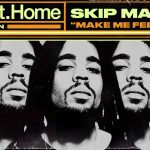 Here’s Bob Marley’s grandson with a live version of ‘Make Me Feel’ to lighten the days of lockdown. Released as part of the ‘at home’ series from Vevo, this laidback track is true to the spirit of reggae and roots, soothing and musical. The maternal grandson of Bob Marley, Skip Marley is a member of this legendary reggae family that also includes his mother Cedella and uncles Ziggy, Stephen, and Damian Marley. His own sound draws more widely from contemporary pop, rap, and rock, and he featured, perhaps surprisingly, on Katy Perry’s 2017 hit, ‘Chained to the Rhythm,’ followed by several solo singles.

Born in Kingston, Jamaica and raised in Miami, Florida, Skip Markey is a self-taught musician and first performed at the age of 15, when his uncle Stephen prompted him to sing the chorus of ‘One Love’ on-stage. In 2016, Skip debuted on the family’s Island-distributed Tuff Gong label with the ballad ‘Cry to Me.’ After signing with Island Records itself, he debuted on the label in February 2017 with the pop-oriented ‘Lions’. A week later, Katy Perry released ‘Chained to the Rhythm,’ a collaboration with Skip, and the two performed it at the 59th Annual Grammy Awards. Skip then released a series of well-received singles including ‘Calm Down’ and ‘Refugee’ as well as 2019 collaborations with his uncle Damien (‘That’s Not True’) and H.E.R. (‘Slow Down’). After a 2020 single, ‘No Love,’ he enlisted Rick Ross and Ari Lennox for ‘Make Me Feel’ which is now streaming on all platforms. 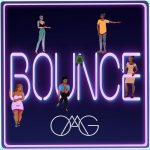 Here’s a new and intriguing sound from the OMG collective. Its owner is Chris Fosh, a singer, rapper and songwriter. Founded in London in 2011, the collective is a rare opportunity for singers, songwriters, producers and musicians to come together in a cross-genre music-making endeavour. Based on the values of creativity, work discipline and collaboration, it has a loose and fluid membership, united by the goal of creating and disseminating new music. This new release – ‘Bounce’ – is an arresting deep-voiced electronic excursion drawing from rap and dancehall, its closing electronic sounds almost reminiscent of the days of dubstep. It’s worth hearing in its own right, as well as worth supporting a venture committed to new sounds and new artists. No time fe yu nonsense: listen here! OMG Collective: Bounce, release 2nd October 2020.
September 9, 2020By John Fenwick UncategorizedLeave a Comment
Recent Posts
Contact Us