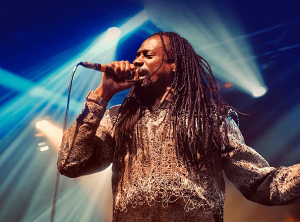 Here’s the renowned UK artist General Levy with a great little fast-paced dancehall/ragga song ‘Jah Guide’, taken from the upcoming single-rhythm album ‘Africa We Want’. The album, from French label Conquering Records, features a host of performers including Anthony B., Skarra Mucci, General Levy, Queen Omega, Natty Jean, Sir Jean and last but not least Solo Banton in duet with BB Seaton – the original lead singer of the Gaylads whose 1967 Studio One song ‘Africa’ forms the basis for the rhythm track used throughout. Conquering Records is the label derived from the Conquering Sound team of selectors. Launched in 2016, the label was very successful with its initial release of ‘My Enemies Riddim’, released in 2017 and featuring the likes of Lutan Fyah. 2018 saw the release of the ‘Speed It Up’ single, issued on a maxi 45 with remixes done by some of the top names in the French dub scene. This great release from General Levy is the chance to get acquainted with the Conquering Records sound.