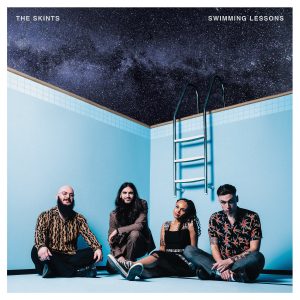 The Skints have featured on these pages many times. It’s hard to believe that this punky reggae outfit from London have been active for more than a dozen years but here they are again with a fresh political edge on their single ‘The Island’. The title denotes the UK in a post-Brexit world, alone and dreaming in vain of glories in a world of Conservative fantasies.

The band says: “Well here we are. I feel there’s so much that’s been said already, and we’re all sick of it. There’s a million reasons to hate Brexit but to touch a personal note regarding The Skints; as working class musicians who until recently had the freedom to travel, live and work in the European Union as much as we liked, that right has been stripped from us against our will. It feels violating and isolating, so we wrote a song about it. Solidarity to all those whose lives are being negatively impacted much more than ours by this nightmare.”

The Skints’ debut album ‘Live, Breathe, Build, Believe’, released in 2009, was championed by BBC Radio 1’s Punk Show, whilst 2012’s ‘Part & Parcel’, the second full-length album by the band, further built their fan base and opened doors to extensive touring, festivals and markets outside of the UK and across Europe. The follow-up album, ‘FM’, released in 2015, reached number 5 on the Billboard Reggae Albums chart and number 7 on the Independent Albums Chart in the UK, seeing The Skints tour relentlessly across the USA, Canada and Japan. You can check out earlier review of the band on these pages.

The band has a strong live reputation and has featured at some of the world’s biggest festivals, also receiving recognition in the form of the BBC 6 Music ‘Album of the Day’ and the playlist for earlier single ‘Armageddon’, a Billboard Reggae Charts #1 for the LP and the Independent Albums Breakers Chart. Their music has latterly gained even more in confidence, drawing from reggae, soul, dub, punk, hardcore and rap, bound together by their political and personal commitments to us all.

Musically this new single (from their 2109 album ‘Swimming Lessons’) is a punky rocky thrash with a hint that the band’s background is in reggae and certainly in live performance. Touring in the UK in 2020, they just go from strength to strength.

The Skints: The Island, release 2020 on Mr Bongo/Easy Star records.