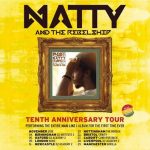 This album came out ten years ago and was a lively infectious take on contemporary reggae. Natty and the Rebelship band now plan to perform the whole album live in their forthcoming tour of the UK. The tour is scheduled for Autumn 2018, kicking off in Milton Keynes on 2nd November and concluding in Manchester on 29th of that month.

Prior to the tour, a limited-edition reissue of the album is planned for September 2018. Released on no less than the Tuff Gong label, ‘Man Like I and I…X’ will be a double-vinyl remastered version of the original ‘Man Like I’ album together with new recordings of favourite tracks featuring some of Natty’s associates including Seun Kuti, Benjamin Zephaniah, Maverick Sabre and El Fari and Ramzi (from Palestinian band 47soul). The album also shares an acoustic version of live favourite “Bedroom Eyes” and a track Natty recorded with Sly & Robbie that did not feature on the original album, alongside four further new original tracks to complete what has justly been described as a ‘collector’s package’.

Natty and the Rebelship: ‘’Man Like I and I…X’, release September 2018 on Tuff Gong records.