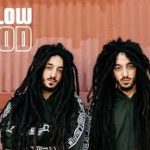 From Italy we find Mellow Mood with a new collection of twelve roots reggae songs. This is their fifth studio album and is politically informed and socially aware throughout. The band has sought to reinvent itself and maintain a fresh approach with each successive album in order to capture something of the strength of their live performances on their recorded output. During April they played a number of dates in England, before heading out across France, Spain and Italy, with a final date due in the next few days in Amsterdam. As for the music, it largely remains true to the band’s name: heartfelt and quietly angry at the state of the world but fundamentally gentle in nature. The album opens with the brief and wistful ‘Call Back the Love’ which sets the scene for a series of fine roots songs underpinned by a powerful bass sound. There is a strong dub feel to some of the songs, as in the fadeout of ‘Another Day’ and a melancholy tone to the album as a whole. The production is strong throughout. Sweet reggae music for soothing the soul.