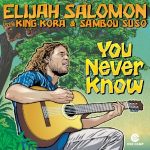 Here is a new single from Elijah Salomon in conjunction with Gambian artists King Kora and Sambou Suso who are both Griots, that is, West African troubadours and cultural historians. The sound is fresh and vital – and also unusual in its highly effective combination of reggae rhythm and African vocals alongside ascending and descending Gambian instrumentation. Based in Switzerland, Elijah has been releasing his distinctive brand of reggae for over ten years and the fusion achieved on this release is worthy of your attention. The single is accompanied by a dub version courtesy of Joe Ariwa which proceeds with a fine pace and great clarity: take a listen!